Each item in the Object Manager list consists of an icon indicating the object type, a text label for the object, and a visibility check box. A check mark

indicates that the object is visible. An empty box

indicates that the object is not visible. Click the check box to change the visibility of the item. Invisible objects do not appear in the plot window or on printed output.

If an object contains sub-objects, a

displays to the left of the object name. Click the

icon to expand or collapse the list. For example, a graph object contains a plot, e.g., line/scatter, plus at least two axes. To expand the tree, click on the

icon, select the item and press the plus key (+) on the numeric keypad, or press the right arrow key on your keyboard. To collapse a branch of the tree, click on the

icon, select the item and press the minus key (-) on the numeric keypad, or press the left arrow key.

Click on the object name to select an object and display its properties in the Property Manager. The plot window updates to show the selected object with a selection bounding box and the status bar displays the name of the selected object. To select multiple objects, hold down the CTRL key and click on each object. To select multiple adjacent objects at the same level in the tree, click on the first object's name, hold down the SHIFT key, and then click on the last object's name.

To change the display order of the objects with the mouse, select an object and drag it to a new position in the list above or below an object at the same level in the tree. The cursor changes to a black right arrow if the object can be moved to the cursor location or a red circle with a diagonal line if the object cannot be moved to the indicated location. For example, a line/scatter plot can be moved anywhere within its graph object or into another graph object, but not into a group object. Objects can also be arranged using the Layout | Move commands: To Front, To Back, Forward, and Backward. 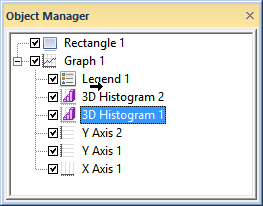 The cursor changes to a black horizontal
arrow if an object can be moved to a
new location in the Object Manager. 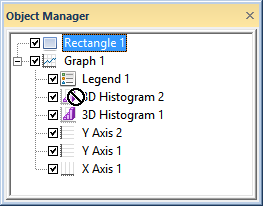 The cursor changes to a circle with a
diagonal line if an object cannot be moved
to a new location in the Object Manager.

To delete an object, select the object and press the DELETE key. Some objects cannot be deleted. For example, you cannot delete an axis that is currently in use by a plot in a graph.